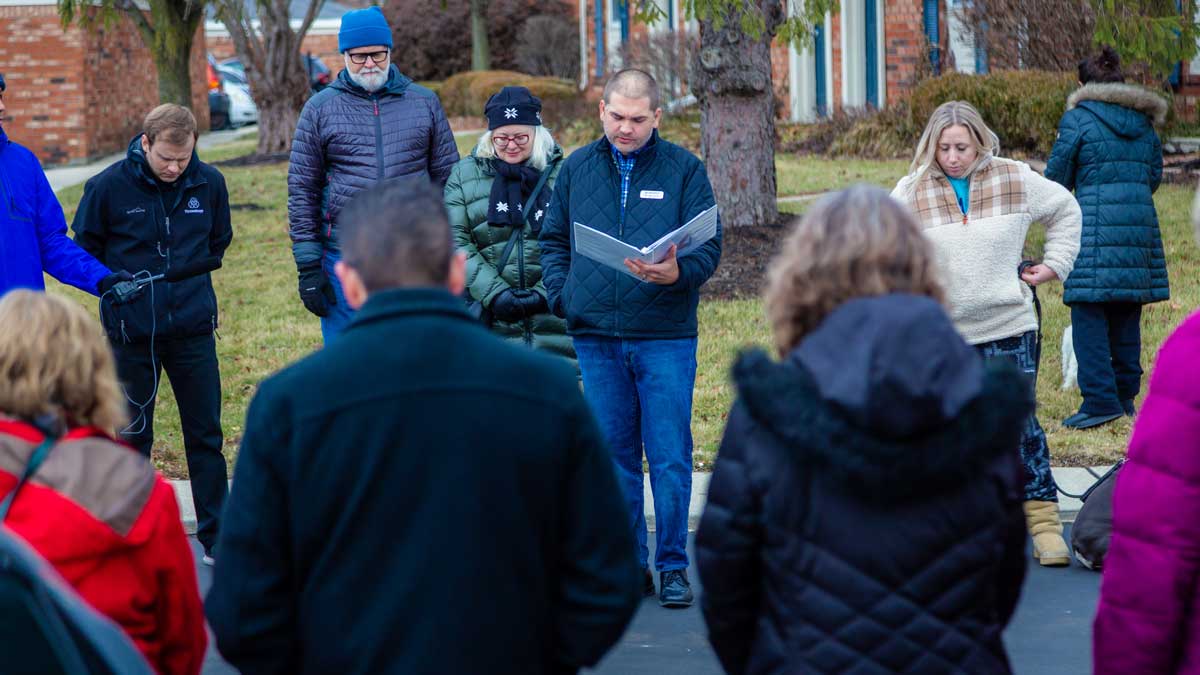 As people of faith, it’s important to pray anytime and everywhere. I recently had experiences that reminded how important it is. Whether we’re in church or out in public, we can pause for prayer. I recently found myself praying in two very different places.

The first one came as I lead a small group of people in prayer at Lake Castleton Apartments after 25-year-old Sean McNellye was shot and killed there on New Year’s Eve. We prayed for not only his family and friends, but also those of 16-year-old Michael Mason, Jr. who was shot and killed at Castleton Mall. With cameras from several news stations, a few residents of the apartment complex, members of our congregation, and two City County Councilors, we prayed together outside for peace, comfort for the families, and non-violence.  It was a powerful reminder of how a simple of act of standing together in peace and prayer can impact our community.

Prayer at the Indiana Statehouse

The second opportunity to lead people in prayer came the very next day on the 4th Floor of the Indiana Statehouse. I helped to organize and plan a Methodist Day of Prayer at the Statehouse for the opening of the 2023 legislative session. Clergy and laity in the United Methodist Church and the African Methodist Episcopal Church (AME) attended this gathering. It was another powerful moment to stand in the halls of power and decision making to pray for the common good of all Hoosiers and to pray for wisdom and guidance for all those making decisions in that place.

Prayer in the Car

We had a clergy carpool to the Statehouse for our gathering. As I pulled up to the church to drop off the final clergy person, the pastor asked me if I had any prayer requests. I shared with her a few things. As I put my car in park, before she opened the door, she quickly said, “Let’s pray together.” It was a beautiful and kind moment of grace to be prayed for by one of my colleagues.

These experiences are reminders that as people of faith, we can pray anytime and everywhere. Whether we’re outside standing in a place where violence occurred, where decisions are made, or even in the car.

I invite you today to join me in praying for peace for our city that continues to be plagued by violence, for our elected leaders as they continue their work this year, and for one another.